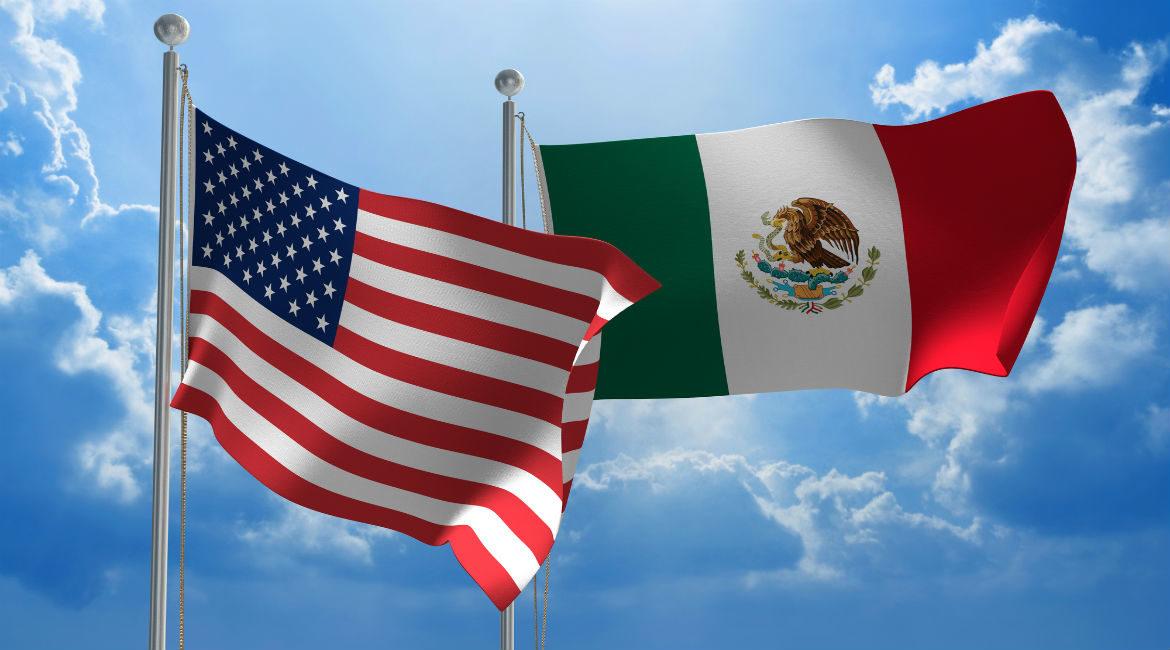 As the U.S. is historically a country with a population that almost exclusively consists of immigrants, and at the first stage of its existence the employment of newly arrived immigrants was not a problem.

Until the XIX century the immigration legislation in the United States did not exist, moreover, the official lists of arrivals were not held.

The matter of public interest and political struggles were the conditions of citizenship, but the problem of immigration limitation did not arise until the last third of the century, when its scope immeasurably increased: from 1870 to 1920 about 26 million people immigrated to the United States - more than the entire population of the country in 1850.

In 2005 the number of detained infiltrators was about 1.2 million people, 97-98% of which were at the border with Mexico. According to experts, in fact, the number of people, illegally entering the United States, is now 4-5 more times higher. According to the Center for Immigration Studies for 2004 and the Federation for American Immigration Reform in 2005 the country's population of illegal immigrants was about 10 million people. According to Bear Stearns Report for 2005, the number was twice as much. [1] According to the Center for Immigration Research, based on the 2010 national census, 10-12 million illegal immigrants lived in the United States, and that is the whole Pennsylvania or a half of Texas.

According to the Pew Hispanic Center, 58% of illegal immigrants, living in the U.S., are the Mexicans, 22% were born in other Latin American countries and the Caribbean section (especially El Salvador, Guatemala and Honduras).

In 1994 the U.S. began to build the first defensive structures in some parts near the border with Mexico.

The Los Angeles Times says that even imperfect or incomplete fence, built in the California section of the border with Mexico, has led to a decrease in illegal immigration from 1995 to 2005 in 3.5 times.

The largest flow of illegal immigrants passes through the Arizona section of the US-Mexican border. According to the U.S. Department of Homeland Security, in April 2010, amongst 10.8 million illegal immigrants, living in the country at that time, there were 460 thousand of them within the territory of Arizona.

In this state the strong reaction to illegal immigrants was particularly noted - both from the local authorities and from the U.S. citizens.

In April 2010, Arizona adopted the strictest U.S. law against illegal immigrants. It allows the police to detain people without documents.

This law has caused a mixed reaction: according to surveys, conducted by Ipsos/McClatchy and CNN, it was supported by more than half of Americans.

But the police chiefs, municipal and federal legislators, U.S. Department of Justice and even the Mexican government joined numerous violent protests.

Therefore, the border between Mexico and the United States divides the two worlds: the Spanish-Indian space in Latin America and the Anglo-Saxon industrial and fiscal paradise of North America.

For many years, the problem of the illegal immigration has been very serious for the U.S. The suggestion to build a border wall between the United States and Mexico has been introduced from many different standpoints. Although there are negative public relations and practical concerns about building a wall along the border, there are also a number of positive consequences that the border wall can have. Every night, the U.S.-Mexico border, is crossed by hundreds of uninvited guests.

They are partially caught and returned to their homeland (using the U.S. taxpayers’ money). However, in a couple of months they are again in the U.S.

The common border between the U.S. and Mexico spans 3,200 miles. I would call such a border as nominal one.

The American side makes some attempts to strengthen the border. A few years ago the U.S. started to build the wall; it took millions of dollars, but the wall was not completed. Meanwhile, the necessity of such a wall is caused by many factors.

One of the reasons why this problem needs the close attention is the illegal drug trade.

Drug dealers smuggle tons of drugs from Mexico to the United States across the border, therefore, millions of dollars are swirling on both sides of the border.

How is the transition of Mexican immigrants across the border organized? Along the border on the Mexican side, there are several hundred of guest houses and hideouts.

On the Mexican side, the convey (transition) of people to the U.S. is commercialized: each group is taken over the border by the experienced guide. More than 11 million illegal immigrants from Mexico now live in the U.S. Why has the illegal immigration grown to such an extent? This process is caused by poverty and by seeking an opportunity to earn some money in America.

We can distinguish several groups of the Mexicans, who try to find happiness abroad for various reasons. Adult married men cross the border to engage in some temporary work and send money in order to support their families. Entire families with children decide to leave their homeland in search for a better life; young families (without children) risk starting the family life in a more prosperous country; a large share of illegal immigrants is drug smugglers, who cross the border in both directions.

According to the U.S. law, all children born in the country automatically become American citizens with all the attendant benefits. Illegal parents receive for each child allowance, free medical care, food stamps, housing and public services. In this scenario, young parents are not in a hurry to find a job because of money given for the benefit of children and all sorts of other benefits are enough for the whole family to live comfortably.

The country is already suffocating from the invasion of uninvited guests. Therefore, the usual border should be replaced in favor of the wall, in order to rectify somehow the situation and resolve the immigration process problem.

The necessity of the wall between the U.S. and Mexico is caused by the fact that annually the U.S. spends a lot of money to capture, deport and maintain the illegal immigrants in the country. This includes the border protection, the content service, which handles the identities determination of the Mexican illegal immigrants, payment of all monetary benefits and free medical care to those who settled in the States.

Additionally, about a half of the illegal immigrants caught at the border have a criminal past.

Those who were not detained at the border begin to act in the U.S., committing murders, armed robbery, selling drugs. According to the official statistics, for example, in 2008 more than half of the criminal and administrative cases in the country were brought against the Mexican illegal immigrants. Illegal immigrants have an impact on the distribution of seats in the U.S. parliament. This may seem strange. Though, the number of congressmen depends on the size of the state's population.

Regularly the states hold census, which takes into account illegal citizens. Many illegal immigrants live in the border states of Mexico. These states receive additional seats, while other states are losing them.

Thus, all factors point at the necessity of the great wall between the U.S. and Mexico. However, the wall between the U.S. and Mexico will help to resolve the immigration problem only in the complex with the legislation changes. At the federal level for more than ten years the authorities considered a bill, which provides permanent residence for immigrants under certain conditions, for example, if the applicant has served in the U.S. Army and graduated from an American college or entered the U.S. as a child.

In 2007 a public opinion poll, conducted by the Los Angeles Times in conjunction with the agency Bloomberg, showed that such conditions are supported by most Americans.

Luis Alfonso de Alba Permanent Representative of Mexico in the United Nations, who is the first president of the UN Council on Human Rights, on behalf of the Government of Mexico, criticized the new law, accusing the U.S. in human rights violation.

Luis Alfonso de Alba said that Mexico next week will make a formal protest and bring to the UN Council on Human Rights draft resolution, condemning the U.S. plans to build a border fence, the appearance of which would force illegal Mexican immigrants to use more dangerous channels to entry the United States.

According to the experts` estimations, every year, the US-Mexico border is crossed in the north by about 400 thousand illegal immigrants, said NEWSru.com. In the U.S. today, about 5 million Mexicans, who are usually working in the most severe and unskilled jobs, are under the irregular situation. Due to tightened border control the illegal immigrants will undoubtedly try to cross it in the most remote and inaccessible places.

Vicente Fox, the President of Mexico, in his turn, named the law concerning the Great Border Wall as ‘disgraceful and devoid of vision for the future’.

Felipe Calderon, a former president of Mexico, also gave the negative assessment of the new U.S. so-called ‘law of the wall’.

According to him, the new law is a ‘regrettable, useless and expensive’ measure. ‘The U.S. is repeating the mistakes of the Berlin Wall,’ said Felipe Calderon.

Therefore, a lot of politicians and scientists note that the border wall between the U.S. and Mexico will not solve the problem of illegal immigration, because from 2006 to 2010 the flow of the Mexican immigrants to the United States decreased by sixty percent compared to previous years. However, it can be confidently said that it took place not due to the construction of the border wall between the U.S. and Mexico and tighten control on the border between two countries, but due to the improved well-being of the Mexicans and the problems faced by the U.S. labor market.

First of all, the problem of protecting the borders between the two countries lies in low completion of the underfunding and border services, in particular the U.S. Border Service (US Border Patrol). Each mile of border is guarded by four persons, but in remote areas, such as the desert or mountains, the control of the state border has to be improved.

As a conclusion it must be said the border wall between two countries can be useful in certain parts of the border between the U.S. and Mexico, preventing the passage of smugglers.

Hungry desperate people are eager to move to the United States to earn money, therefore the construction of the border wall will not stop them.

A lot of members of the U.S. society insist that the U.S. Congress should pass the law to provide all workers in the country (citizens and foreigners) with a personal social security card.

This essay about mexico is the work of professional writer Heiley Durst who is completely qualified in writing flawless essays and if you want to read more follow BestWritingService.com

Please log in to like, share and comment!
Search
Sponsored
Categories
Read More
Health
Medical Cannabis Market Foreseen to Grow Exponentially by 2027
Medical Cannabis Market: Introduction According to the report, the global medical cannabis market...
By Pooja Mahajan 2022-03-14 19:00:57 0 27
Literature
5 Secrets to Essay Writings
Essay writing need not be a difficult job if you follow all the rules. Yet, the word essay...
By David Logan 2021-07-16 11:15:45 0 121
Fitness
Is there a Minimum Deposit to operate with Bitcoin Code?
Bitcoin Code is a trading app that claims to enable investors to generate thousands of...
By Biocoide Wieusa 2021-08-13 15:01:28 0 67
Literature
Observation Elevators Manufacturer Share The Management Techniques Of Leakage In Elevator Pit
Next, the Observation Elevators Manufacturer will introduce the methods for controlling the...
By Huzhoufuji Huzhoufuji 2020-04-10 06:32:32 0 285
Space
Rams have to have added playmakers for Matthew Stafford exchange towards thrive
Los Angeles Rams in general supervisor Les Snead pulled it off, going upon in opposition to Jared...
By Jenkins Larkin 2021-06-28 06:45:36 0 104